Embracing Doubt (Part IV): A God Who Lets Us Wander 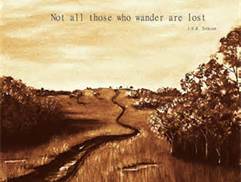 This is Part IV of the relationship between faith and doubt (primarily in a Christian context but the same principles apply for other religious traditions).  In Part I, I described some of my own faith journey and the excerpt from Fr. James Martin, S.J. how the Path of Disbelief is one of the six paths to God.

In Part II, we discussed Pope Emeritus Benedict’s insights on how doubt is a common feeling, even among revered saints such as Teresa of Avila, and how this doubt can serve as a springboard to strive for a deeper intellectual and spiritual understanding of faith, which leads to a richer faith experience.

In Part III, we discussed how faith and doubt to form the basis of cordial dialogue with non-believers and a deeper understanding of our common humanity.

Today, we turn to insights from Deacon David Backes.  Mr. Backes is a Professor at the University of Wisconsin – Milwaukee and an ordained deacon in the Roman Catholic Church.  Mr. Backes runs the blogsite, New Wood, which addresses a variety of issues from spirituality, environmental science, everyday mysticism and outstanding sermons.

A couple of years ago, when I was in my own spiritual journey in the desert of doubt, I came across a post by Professor Backes about his own experiences which touched me in a personal way.  Here is an excerpt where David speaks:

“I wandered for seven years, trying to figure out what to believe and how to live.  I needed that period of wandering.  It was crucial to my spiritual growth.  So many are afraid to wander–as though God will be angry with them for trying to figure things out for themselves rather than accept what is told to them about God by people who may well not be very good sources.  This is yet another variation on the damage that is done by the image of an angry, harsh God.  It makes some people stay in religion like prisoners in a cell, never experiencing the freedom that religion is supposed to help them discover.  And it makes some people turn away from and even against both religion and the God they believe religion teaches.

God lets us wander so we will know what it means to come home.  I’d go even further than that.  I’d argue that God would much rather have us wander than to spend our lives as spiritual zombies, more dead than alive.  He hopes we will want to find our home, but he knows all the twists and turns and what each of us needs and doesn’t need if we are to maximize our chances of becoming the joyful, holy people he made us to be.” — David Backes

The above statement very much describes my journey. I remember when I was younger, I was troubled by the parable of the Prodigal Son.  I identified with the older brother (and not just because I am an oldest brother:-). I was troubled because my understanding of Christianity and the world was that if you worked hard, followed the rules, you would and should be rewarded, both spiritually and materially. Like the older brother, I thought it was fundamentally unfair for someone who had wasted his talents and fortune to be welcomed back in such a loving, compassionate and forgiving manner.

Not surprisingly, as I entered by 20s, this 2nd grade spiritual view did not fill my soul and for 15+ years I meandered through various flavors of agnostism, deism and Eastern spirituality, but mostly I ignored my spirituality to focus on other, non-spiritual areas of my life. Interestingly, those areas (health, family, career) were (and are) going very well but I had this strong undercurrent of angst and fatigue that I always had with me. It was not until this spiritual longing deep inside my soul became unbearable (I call it the God hole as it a hole in the soul that only God can fill) and I let go of my 2nd grade spirituality really started to understand my Catholic faith in a new, adult, way. I realize that the God of unconditional love loved me just as I am, with all of my faults and imperfections, regardless of what I have done or failed to do, and would welcome me back just as the father did to the Prodigal Son.  If I did not have these years of wandering (like the youngest Prodigal son), I would never have returned home.

I am a father of two with eclectic interests in theology, philosophy and sports. I chose the pseudonym William Ockham in honor of his contributions to philosophy, specifically Occam's Razor, and its contributions to modern scientific theory. My blog (www.teilhard.com) explores Ignatian Spirituality and the intersection of faith, science and reason through the life and writings of Pierre Teilhard de Chardin (pictured above).
View all posts by William Ockham →
This entry was posted in Embracing Doubt and Mature Faith and tagged Catholic, Christian, David Backes, faith, God, New Wood, peace, Prodigal Son. Bookmark the permalink.

3 Responses to Embracing Doubt (Part IV): A God Who Lets Us Wander