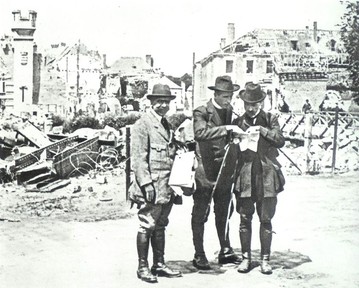 Geological Expedition to la Fere (Aisne), France, May 1920. Teilhard de Chardin is the one in the center.

After World War I, Teilhard de Chardin recuperated which gave him the time to develop his thoughts.  Two of the essays that he wrote in late 1918 and early 1919 highlight the tension that he faced his entire life.   On one hand, Teilhard was an orthodox Catholic priest who had a deep love of Christ and reached back to the earliest Christians in St. Paul, St. John the Evangelist and St. Irenaeus for expressions of his thoughts.  On the other hand, although Teilhard was always loyal to his vows of obedience, he often had a rocky relationship with the Church hierarchy during his lifetime (which was later rectified posthumously by leading clerical theologians such as Pope Benedict XVI and Cardinal Henri de Lubac).

The first trait was apparent in L’Element Universel which he wrote in 1919.  This essay was not intended for publication but it represents his most concentrated exposition of his doctrine to date.  In this essay, he outlined his own journey in three stages to understanding God.  First, he had recognized the organization and beauty of the created universe provides “immediate and tangible reality of a divine will”.  Teilhard was very critical of pantheism saying it was irrational as it presupposed “two contradictory properties, necessity and contingence.”  Second, Teilhard drew upon his Ignatian training and their belief in ‘finding God in all things’ to recognize the creative action of God in everything that moved or existed.  But there still remained between the human soul and God “a hiatus, a gap, a coldness — the distance separating the necessary Being” with its human creation.  For his third stage, Teilhard reached back to St. Paul for his concept of the universal and cosmic Body of Christ.  It was through assisting the world reach its potential that one came to Christ.

The second trait was evidenced in his private 1919 memorandum addressed to his Jesuit superiors, in which he challenged the Church to be more engaged in the world.  According to Robert Speaight:

“[Teilhard] pleaded that if St. Ignatius were right in reminding the Christian of his duty to ‘feel with Mother Church’, it was equally the duty of Mother Church to ‘feel with mankind’. It was ridiculous for the clergy to spend their time in the ‘beatification of a Servant of God’, in the propagation of special devotions, and on the minutiae of funeral rites, when they should be preaching and practicing ‘the Gospel of human effort’. The present business of the Church was to meet the reproach that it produced ‘souls interested in their own selfish advantage, uninterested in the common task; and therefore uninteresting’ to those which accorded a primacy of . . . ‘labor over detachment’.  The Christian and the human ideals no longer coincided; this was the ‘great schism’ which now threatened the Church.  Teilhard asked for priests [editors note: and presumably nuns, other religious and strong Christian lay persons] who would devote themselves to science or sociology as part of their vocation, and who would not be afraid to let their fellow-workers see that they too experienced ‘the richness and the anguish of doubt‘. ” (Robert Speaight, “The Life of Teilhard de Chardin, pp. 99-100).

Ironically, the institutional Church would follow the advice above with respect to Teilhard.  During the upcoming years, the Church stifled Teilhard’s desire to publish his thoughts on the synthesis on theology and science and encouraged him to focus on serving God through his vocation as a scientist, at which he excelled.  In February 1919, he received a letter from his superiors suggesting he return to France and devote himself to geology.

After returning to Paris, Teilhard continued his studies with Marcellin Boule in the phosphorite fossils of the Lower Eocene period in France. Extensive field trips took him to Belgium where he also began to address student clubs on the significance of evolution in relation to current French theology. By the fall of 1920, Teilhard had secured a post in geology at the Institute Catholique and was lecturing to student audiences who knew him as an active promoter of evolutionary thought.  In 1922 Teilhard received a Doctorate with Distinction and was elected president of the Geological Society of France.  Teilhard was now recognized as a master in his field and was consulted by his peers.

Teilhard continued to forcefully speak and write on the symbiotic relationship between evolution and Christianity.  During this period, he wrote:

“Without biological evolution which produced the brain, there would be no sanctified souls; similarly, without the evolution of collective thought which alone can realize on earth the fullness of human consciousness, could there be a consummated Christ? “

There were rumblings of an approaching storm with the Roman curia becoming more conservative around this time.  The Church did not have a problem with the scientific theory of evolution; however, it expressed concern about making this theory a presupposition to Catholic theology, which some of the Church hierarchy (incorrectly) thought was the teachings of Teilhard de Chardin.  Nevertheless, the climate in ecclesiastical circles towards the type of work that Teilhard was doing gradually convinced him field work in geology paleontology would not only help his career but would also quiet the controversy in which he and other French thinkers were involved.

The opportunity for field work in China had been open to Teilhard as early as 1919 by an invitation from the Jesuit scientist Emile Licent who had undertaken paleontological work in the environs of Peking. On April 1, 1923, Teilhard set sail from Marseille bound for China. Little did he know that this “short trip” would initiate the many years of travel to follow.