Orthodoxy of Teilhard de Chardin (Part I): Pope Benedict and Spirit of the Liturgy 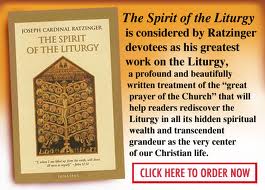 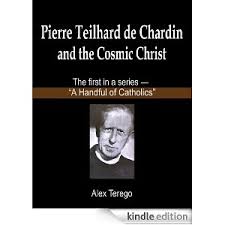 I was hoping to save this post and series until later, when I could have had a more comprehensive assessment.  However, as I am becoming more immersed into the blogosphere, I am starting to realize how controversial a figure Teilhard de Chardin is in some circles.  I knew that Teilhard was a lightening rod among some schismatic heretics such as SSPX.  I also knew that certain non-Christian spiritual authors had taken a stale, watered-down, non-Christian version of Teilhard de Chardin in their spiritualities.  However, I was absolutely shocked that even mainstream Catholics of good faith are still skeptical of the orthodoxy of Teilhard de Chardin.  This post is the first of a series which will hopefully put these notions to rest.

The misconception of non-orthodoxy on Teilhard de Chardin comes from two sources.  First, Teilhard was prohibited from publishing his theological writings during his lifetime.  Teilhard was allowed to publish scientific papers arising out of his work as a paleontologist.   Second, many of Teilhard’s writings were published after his death.  The pre-Vatican II Church issued a warning on Teilhard’s writings (but notably did not put any of Teilhard’s works on the Prohibited Index, which existed until 1966).  The primary concern about Teilhard’s orthodoxy was over his explanation of original sin.  I will not get into the debate on whether the warning was issued under misformed pretenses or dissect its meaning but you can read the full warning here.

What I will focus on in this series is how Teilhard de Chardin’s vision was incorporated into Catholic theology by leading theologian of the last 50 years.  There are many outstanding contemporary theologians (e.g. John Haught and Ilia Delio) who have taken Teilhard’s core ideas and expanded them in a more coherent theology.  However, some Catholic critics of Teilhard de Chardin are unlikely to be convinced by non-hierarchical current theologians, much less a lay person in rural Wisconsin:-).

Hence, in this initial series on the orthodoxy of Teilhard de Chardin, we will focus on three outstanding theologians who also speak for the Church:  Pope Emeritus Benedict, Cardinal Henri de Lubac and Archbishop Józef Życiński.

During the first week of this series, we will focus on one of the most influential theologians during my spiritual journey, Pope Emeritus Benedict.  Benedict was known for many things.  But perhaps he was best known for embracing the liturgy as the focal point of Christian worship.  In 2000, Pope Emeritus Benedict (then Joseph Ratzinger) published “The Spirit of the Liturgy“, which was described as follows:  “In this beautiful treatment of the “great prayer of the Church,” Pope Benedict XVI offers his insights on many areas of the Liturgy to help readers rediscover the spiritual wealth and grandeur of the Liturgy as the very center of our Christian life.”

In Chapter 2 of this book, Benedict describes how Teilhard’s theological vision of Christ is central to the Christian liturgical and Eucharistic experience:

“And so we can now say that the goal of worship and the goal of creation as a whole are one and the same—divinization, a world of freedom and love. But this means that the historical makes its appearance in the cosmic. The cosmos is not a kind of closed building, a stationary container in which history may by chance take place. It is itself movement, from its one beginning to its one end. In a sense, creation is history. Against the background of the modern evolutionary world view, Teilhard de Chardin depicted the cosmos as a process of ascent, a series of unions. From very simple beginnings the path leads to ever greater and more complex unities, in which multiplicity is not abolished but merged into a growing synthesis, leading to the “Noosphere”, in which spirit and its understanding embrace the whole and are blended into a kind of living organism. Invoking the epistles to the Ephesians and Colossians, Teilhard looks on Christ as the energy that strives toward the Noosphere and finally incorporates everything in its “fullness’. From here Teilhard went on to give a new meaning to Christian worship: the transubstantiated Host is the anticipation of the transformation and divinization of matter in the christological “fullness”. In his view, the Eucharist provides the movement of the cosmos with its direction; it anticipates its goal and at the same time urges it on.” (emphasis added)

Tomorrow, we will continue our discussion of how Pope Benedict Emeritus incorporates the vision of Teilhard de Chardin’s cosmic host into Christian theology and concern for the environment.

Part II: Pope Emeritus Benedict discusses statements made by St. Paul and Teilhard de Chardin of the cosmos being a living host.

Part III:   The concept of the role of the Cosmic Christ (the pre-existent logos who is the second person of the Trinity) in the creation of the cosmos.

Part V:  Pope Emeritus Benedict discusses Teilhard de Chardin’s views on the evolution of humanity in the Christian context towards the Omega Point, or the Cosmic Christ.

Part VI:  Cardinal Henri de Lubac discusses the incarnational theology of Teilhard de Chardin that has Christ as its center.

I am a father of two with eclectic interests in theology, philosophy and sports. I chose the pseudonym William Ockham in honor of his contributions to philosophy, specifically Occam's Razor, and its contributions to modern scientific theory. My blog (www.teilhard.com) explores Ignatian Spirituality and the intersection of faith, science and reason through the life and writings of Pierre Teilhard de Chardin (pictured above).
View all posts by William Ockham →
This entry was posted in Orthodoxy of Teilhard de Chardin and tagged Catholic, Christian, Eucharist, Ilio Delio, John Haught, Joseph Ratzinger, Mass, Noosphere, orthodoxy, Pope Benedict, Spirit of the Liturgy, teilhard de chardin, Vatican. Bookmark the permalink.

13 Responses to Orthodoxy of Teilhard de Chardin (Part I): Pope Benedict and Spirit of the Liturgy