I am a father of two boys, ages 9 and (almost) 6, so I am not yet the father of teenagers.  However, I have a lot of friends with teenage children.  More importantly, I remember all too well the trials and tribulations of being a teenager myself and I am not entirely looking forward to the next 15 years of being a parent.

One of the challenges I am concerned with is how to raise two joyous faith-filled boys in a secular world where the dominant themes are rampant materialism and lukewarm spiritualities and intellectual relativism.  It is not an easy task.

The Center for Applied Research in the Apostolate (CARA) at Georgetown University recently published an interesting study on attitudes of Catholic teenagers.  You can read the full report here but set forth below are some of my take-aways:

1.  Catholic Identification.  Humans are essentially tribal by nature.  We base the identity of ourselves and others on the groups we identify with.  (As an aside, that is why the Christian idea was, and still should be, extraordinarily revolutionary:  Christ became incarnate not for a chosen few, but for everyone; As St. Paul said, Christ made it clear that these these tribal barriers we create are artificial and we are one in the Body of Christ). This is especially true of teenagers, who are exploring and developing their individual identities.  One of the questions asked by CARA was whether the teen viewed themselves as Catholic.  From the report:

“If you are a Catholic parent of a teenager the study indicates that the first thing you might want to ask your child is if they consider themselves to be Catholic. Although all of the teens we interviewed had Catholic parents or a Catholic parent, some did not share this faith. . . only three in four of all teens interviewed (75%) self-identified as Catholic. Twelve percent said they did not have a religious affiliation, 6% indicated that they were affiliated with a Protestant denomination, and 7% noted an affiliation with some other religion.”

This data is somewhat skewed in that the 75% Catholic identification included all teens in the survey, including those who only had one parent as Catholic.  For those teens who had two Catholic parents, the rate of teen self-identification as Catholic increased to 92%.

2.  Communication.  I grew up in a household with two model Catholic parents, both in terms of their piety and their commitment to serving others.  However, we never talked about our faith, which resulted in them never addressing questions I had about the faith when I hit my teen years.  Today’s teens have a similar situation where only 8% of parents talk daily about their faith and a full 45% talk rarely or never about their faith.

3.  Importance of Faith.  In the CARA Survey, 75% of teens said that the faith was important or very important to them.  25% said faith was not too important in their lives.

4.  Religious Activities.  The teens were asked about their religious activities.  Prayer ranked highly (71%) but bible study ranked low.  According to the survey:

“The teens were also asked about the religious activities they take part in on a regular basis. Thirteen percent indicated regularly participating in retreats. Eight percent say they regularly participate in prayer groups, 7% in Eucharistic adoration, and 7% in Bible study. A quarter (25%) said they had participated in a parish youth group at some point. Fifteen percent said they had been an altar server and this percentage is the same for both males and females.

Only 20% indicated that they read the Bible or pray with scripture at least once a month. Six in ten say they “rarely or never” do this. Fourteen percent indicate they pray the rosary at least monthly. At the same time, 71% say prayer is either “among the most important parts” of their lives (25%) or that it is “important, but so are many other areas of my life” (46%).”

5.  View of God.  Teens had a healthy view of God, with a strong majority saying that you can have a personal relationship with God and 69% saying that “God is a positive influence in the world that loves unconditionally, helping us in spite of our failings”: 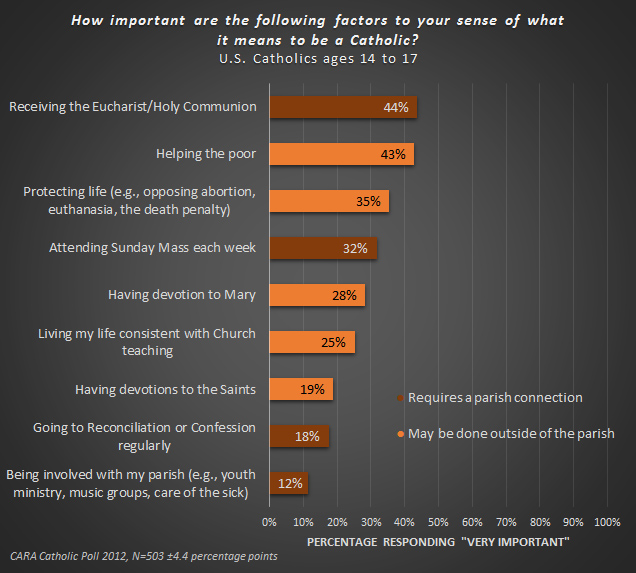 Overall, it is an interesting study.  My impression is that the overall quality of Catholic education, both in Catholic schools and parish faith formation have increased dramatically since the 1970s and 1980s and we are seeing positive results.

However, as a parent, I am always looking for new ways to spread the Christian message to my boys who are sometimes unwilling listeners.  I welcome all feedback that you have in this area in the Comments section below.

I am a father of two with eclectic interests in theology, philosophy and sports. I chose the pseudonym William Ockham in honor of his contributions to philosophy, specifically Occam's Razor, and its contributions to modern scientific theory. My blog (www.teilhard.com) explores Ignatian Spirituality and the intersection of faith, science and reason through the life and writings of Pierre Teilhard de Chardin (pictured above).
View all posts by William Ockham →
This entry was posted in Uncategorized and tagged CARA, Catholic, teenager. Bookmark the permalink.