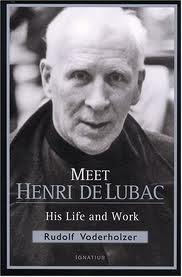 “We need not concern ourselves with a number of detractors of Teilhard, in whom emotion has blunted intelligence”.  Cardinal Henri Cardinal de Lubac, S.J.  – The Religion of Teilhard de Chardin

This is part of a continuing series that will hopefully put to rest any questions that the vision of Teilhard de Chardin is not a part of mainstream Catholic, Christian theology.  In Part I through Part V (you can see a summary and links to these parts at the end of this blogpost) of our series on the orthodoxy of Teilhard de Chardin, we discussed how Teilhard’s ideas have been incorporated into mainstream theology using the writings of Pope Emeritus Benedict XVI.

Today, I was hoping to start a series on the thoughts of one of the most respected theologians of the last 50 years, Cardinal Henri de Lubac, SJ.  Cardinal de Lubac was a theological expert to the Second Vatican Council and a prolific writer on numerous topics including the Church, Christ and engagement with the world.  According to Ignatius Insight, Blessed John Paul II, who had the highest esteem for de Lubac, once stopped his address during a major talk when he noticed de Lubac and acknowleged the presence of de Lubac saying, “I bow my head to Father Henri de Lubac.”

Cardinal de Lubac published several books on the writings of Teilhard de Chardin and put Teilhard’s vision in more traditional theological language.  I was hoping to have a systemic discussion of de Lubac’s synthesis of Teilhard, primarily based on a review of de Lubac’s book “The Religion of Teilhard de Chardin“.  Unfortunately, I ordered the book late and have been super busy at work and home and have not had the chance to review the book.  Hence, the more detailed analysis will be put off to the future.  Instead, I will share the briefest summary of Teilhard through the eyes of Cardinal de Lubac.  The following excerpt is from the fantastic book by Hans Urs von Balthasar, “The Theology of Henri de Lubac“:

“Teilhard’s work nevertheless provides an occasion to develop more intensively a whole dimension – the cosmic dimension of Catholicism – in de Lubac’s thought.  Teilhard is a visionary; he is a scientist; but not least is he a great and conscious apologist who was concerned, as was de Lubac, to reflect upon creation on as noble a scale as possible – and thus upon the Creator.  His ambition was to propose a ‘mysticism of the West’ as an alternative to the apersonal-atheistic mysticism of the East and to modern Western atheism.  A mysticism that would be personal down to its very roots.  The incarnation of God in Jesus Christ occupies the central position in the world.  Both the inner-historical and the eschatological nature of this position let the entire world genesis converge upon Christ, in an ascending movement from matter to life to personal spirit. In the genesis of spirit the movement is at the same time realization (of what was potential). ‘Christ is more real than every other reality in the world‘ says Teilhard. . .

God’s plan of creation completes the edifice that has been begun by Christ, who is the keystone and who integrates into his mystical or eucharistic body all persons (who let themselves be inserted into his universal person). The world is ‘thus held together ultimately only from above.’ Evolution, as coherent, only becomes possible through what comes last, the omega of evolution. It is the final synthesis that explains everything, and Teilhard attempts to build up his ‘proof of God’ by starting here . . . The entire universe attains its real, substantial footing ultimately only in the person of the God-man.” (emphasis added).

In Part I, we described how Pope Emeritus Benedict held Teilhard’s theological vision of Christ as a central feature of the Christian liturgical and Eucharistic experience

In Part II, Pope Emeritus Benedict discussed statements made by St. Paul and Teilhard of the cosmos being a living host.

In Part III, we started to discuss the concept of the role of the Cosmic Christ (the pre-existent logos who is the second person of the Trinity) in the creation of the cosmos.

In Part V, we continued Pope Emeritus Benedict’s discussion on the evolution of humanity in the Christian context towards the Omega Point, or the Cosmic Christ.

I am a father of two with eclectic interests in theology, philosophy and sports. I chose the pseudonym William Ockham in honor of his contributions to philosophy, specifically Occam's Razor, and its contributions to modern scientific theory. My blog (www.teilhard.com) explores Ignatian Spirituality and the intersection of faith, science and reason through the life and writings of Pierre Teilhard de Chardin (pictured above).
View all posts by William Ockham →
This entry was posted in Orthodoxy of Teilhard de Chardin and tagged Henri de Lubac, teilhard de chardin. Bookmark the permalink.