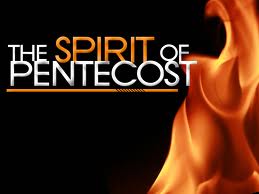 This weekend is the celebration of Pentecost, which marks the end of the Easter Season. The readings can be found here.  The coming of the Holy Spirit is often represented by tongues of fire.  Fire was also prominent for Teilhard de Chardin, ranging from his famous quote on harnessing the energies of love to the deeply mystical Mass on the World.

Today’s reflection is a composite of quotes from multiple sources.  The first is from courtesy of Patricia Datchuck Sánchez, courtesy of National Catholic Reporter:

“The day will come,” said Teilhard de Chardin, “when, after harnessing space, the winds, the tides and gravitation, we shall harness for God the energies of love. And on that day, for the second time in the history of the world, we shall have discovered fire.” In a sense the annual feast of Pentecost is another opportunity, placed in the path of the believer, for discovering and participating in the ever-present fire which is God’s love. Pentecost rounds out and climaxes the Easter event. All that we have remembered and celebrated, viz., Jesus’ saving death, his resurrection and ascension to glory, all of these sacred events took place so that the Holy Spirit might be unleashed upon the world.” — Patricia Datchuck Sánchez

The Church herself will never cease putting questions, trusting in the help of the Paraclete, the Spirit of truth. — St. John Paul II

Nothing here below is profane for those who know how to see. On the contrary, everything is sacred. –– Pierre Teilhard de Chardin

Globalization has humanity poised between two poles. On the one hand, there is a growing of interconnectedness and interdependency between peoples even when culturally speaking – they are far apart. This new situation offers the potential for enhancing a sense of global solidarity and shared responsibility for the land, we cannot deny that the rapid changes occurring in our world also present some disturbing signs of fragmentation and a retreat into individualism. …. a faithful witness to the Gospel is as urgent as ever. Christians are challenged to give a clear account of the hope that they hold (cf. 1 Pet 3:15). — Pope Benedict XVI

May Christ inflame the desires of all people to break through the barriers which divide them, to strengthen the bonds of mutual love, to learn to understand one another, and to pardon those who have done them wrong. Through Christ’s power and inspiration may all peoples welcome each other to their hearts as brothers and sisters, and may the peace they long for ever flower and ever reign among them. — St. John XXIII

Finding one’s own voice, however, haltingly, imparts the power of the Spirit crying out. The boldness to hear the claim of conscience and follow its deep impulses even in the face of loss; the courage to taste righteous anger and allow it to motivate critical resistance to evil; the willingness to utter the prophetic word compassion into the ambiguity of the world. — Elizabeth Johnson, CSJ

9 Responses to Sunday Reflection (Pentecost), June 8, 2014: Unleashing the Fire of the Holy Spirit