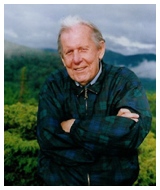 Today is the four year anniversary of the death of Thomas Berry.  Fr. Berry was a was a Catholic priest of the Passionist order, cultural historian and ecotheologian.  I first came across Fr. Berry’s writings when I found the American Teilhard Association, of which Fr. Berry led it to where it is today.

In honor of the memory of Fr. Berry, attached is an excerpt from his eulogy from his Passionist Community:

“In the beginning, the story of Genesis says. In my own life as a Passionist, I especially remember two things that date all the way back to 1951. (I won’t tell you how old I was.) Fr. Coleman Haggerty was teaching us about evolution. This was so far back I don’t know whether he was for it or against it, but for some reason he made a point of the Greek translation of that phrase: “in the beginning” . . . en arche (ἐν ἀρχῇ). He noted that these were the same words with which St. John’s Gospel begins . . . because linking the two texts suggests a cosmic dimension of Christ.

But Thomas gave us a challenge in what he called the Third Mediation of the Divine. Succeeding the Christian mediation found in sisterly and brotherly love, but not dispensing with it, the Third Mediation of the Divine is discovered in the numinous universe. He said: “The basic mood of the future might well be one of confidence in the continuing revelation that takes place in and through Earth. . . . Sensitized to such guidance from the very structure and functioning of the universe, we can have confidence in the future that awaits the human venture.”

You can find the full eulogy here.

I am a father of two with eclectic interests in theology, philosophy and sports. I chose the pseudonym William Ockham in honor of his contributions to philosophy, specifically Occam's Razor, and its contributions to modern scientific theory. My blog (www.teilhard.com) explores Ignatian Spirituality and the intersection of faith, science and reason through the life and writings of Pierre Teilhard de Chardin (pictured above).
View all posts by William Ockham →
This entry was posted in Uncategorized and tagged Thomas Berry. Bookmark the permalink.