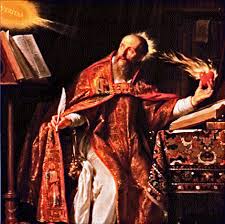 “Our hearts are restless, O God, until they rest in You.” — St. Augustine of Hippo

St. Augustine of Hippo was an early Christian theologian whose writings are considered very influential in the development of Western Christianity and Western philosophy. He was bishop of Hippo Regius (present-day Annaba, Algeria) located in the Roman province of Africa. Writing during the Patristic Era, he is viewed as one of the most important Church Fathers. Among his most important works are City of God and Confessions, which continue to be read widely today. Augustine wrote in troubled times during the end of the western Roman Empire.

Confessions was particularly helpful to me as Augustine detailed his early life of rejecting the Christianity of his mother in favor of the trendy philosophies of his day and the pursuit of worldly success. God kept patiently knocking on Augustine’s door and when he finally opened it he became consumed by the fire of love of God.  For someone looking for a great movie on St. Augustine, I recommend Restless Heart.

Augustine  was born on 13 November 354 in Tagaste (present-day Souk Ahras, Algeria), then a Roman city in North Africa. His mother, St. Monica, was a Berber and a devout Christian and his father, Patricius, a pagan. He was brought up as a Christian but not baptized. He studied rhetoric at the university in Carthage with the intention of becoming a lawyer. However, he gave up this idea and instead went into teaching and study. His study of philosophy, mostly of Plato, and later of Manichaeism over a period of nine years resulted in his effectively abandoning the Christian faith of his mother. Over a period of 15 years he lived with a mistress by whom he had a son, named Adeodatus (meaning, ‘a gift of God’). He left Africa and moved to Rome to teach rhetoric and later to Milan where he got a very prestigious professorship. It was at this point that he began to become disillusioned with Manichaeism and became interested in Neo-Platonism. He also came under the influence of Ambrose, the bishop of Milan. In the year 386, he was greatly inspired by reading the life of St Anthony, a desert Father. There is also the famous story of his hearing the voice of an unseen child, while sitting in his garden in Milan. The voice kept chanting, ‘Tolle, lege’ (‘Take and read’). He opened his Bible at random and the text he found happened to be from Paul’s Letter to the Romans: “Let us conduct ourselves properly as in the day, not in orgies and drunkenness, not in promiscuity and licentiousness, not in rivalry and jealousy. But put on the Lord Jesus Christ and make no provision for the desires of the flesh” (13:13-14).

Augustine decided to give up his promising career, give up the idea of marriage, and
become a Christian and a celibate priest. After a long interior conflict, which he graphically describes in his Confessions, Augustine was finally converted. Together with his son, Adeodatus, he was baptized by Ambrose at the Easter Vigil of 387 in Milan.

In 388, he returned to Africa, sold off his inheritance and gave it to the poor. He then set up a kind of monastery in his house. In 391 he was ordained a priest and, four years later, became coadjutor-bishop of Hippo. From 396, he was the sole bishop in the diocese. He left his monastery but continued to lead a monastic life in his bishop’s residence. He left a rule of life which was later adopted by what is known today as the Order of St Augustine (OSA). Augustine’s intellectual brilliance, broad education, passionate temperament, and deep mystical insight resulted in a personality of very special, if not unique, quality. His interpretation of Christian revelation revealed in his many writings probably has had more influence on Christian thinking than anyone since St Paul. Among his most famous works are his Confessions, Sermons on the Gospel and Letters of John, a treatise on the Trinity and, at the end of his life, his De Civitate Dei (The City of God). This last work deals with the opposition between Christianity and the ‘world’, occasioned by the invasions of the north European tribes and the collapse of the Roman Empire. It is regarded as the first Christian philosophy of history. Many other works were responses to controversies with Manichaeans, Pelagians, or Donatists and led to the development of his thought on the Church, the Sacraments, and Grace. Few, if any, Christian writers have written with such depth on love (caritas) and on the Trinity. Many of Augustine’s themes in City of God are very relevant today.

While Augustine’s great influence on Christian thought has been mainly positive, his teaching on Predestination has come in for criticism. Perhaps due to his Manichean background which he never fully shook off and guilt about his own immoral past, he became almost obsessive about sin and evil. He would condemn unbaptized children and others to eternal damnation. He has also been criticized for his teaching on sex and marriage. Even sex within marriage was seen as a necessary evil and never completely without sin. At the same time he did emphasize, against the Manichaeans, the threefold good of marriage – family, sacrament and fidelity. Later Christian tradition also set aside his view that Original Sin is transmitted through sexual intercourse or that intercourse is tolerated only with the intention of having a child. The Second Vatican Council made it clear that, in a marriage, sexual intercourse is an important expression of love and union.

As a bishop, Augustine lived with his clergy a community life and was actively engaged in church administration, the care of the poor, preaching and writing and even acting as judge in civil as well as ecclesiastical cases. As bishop, he was an upholder of order in a time of political strife caused by the disintegration of the Roman Empire.

He died at Hippo on 28 August 430. At the time of his death, the Vandals were at the gates of Hippo. The cult of Augustine began very soon after his death and was widespread. His relics were first taken to Sardinia. Later Liutprand, king of the Lombards, enshrined his body at Pavia. He is usually depicted in episcopal vestments with pastoral staff but later artists also showed him with the emblem of a heart of fire.

I am a father of two with eclectic interests in theology, philosophy and sports. I chose the pseudonym William Ockham in honor of his contributions to philosophy, specifically Occam's Razor, and its contributions to modern scientific theory. My blog (www.teilhard.com) explores Ignatian Spirituality and the intersection of faith, science and reason through the life and writings of Pierre Teilhard de Chardin (pictured above).
View all posts by William Ockham →
This entry was posted in Uncategorized and tagged Adeodatus, Catholic, Christian, City of God, Confessions, Donatism, Greek philosophy, Hippo, Manichaeism, Patricius, Pelagianism, Plato, St. Augustine, St. Monica. Bookmark the permalink.

5 Responses to Feast of St. Augustine of Hippo (August 28)