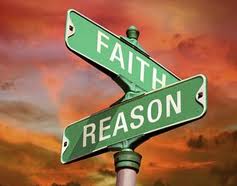 “An important function of theology is that of keeping religion linked to reason, and reason, to religion. Both these functions are of essential importance to humanity. . . [T]here exist pathologies of religion and – not less dangerous – pathologies of reason. Each has a need of the other, and to keep them continually connected is one of the tasks of theology.” — Pope Benedict XVI

I have previously written about the startingly high degree of ignorance in the United States of both science and theology. This lack of knowledge has led to a misconception that there is somehow a conflict between science and religion. One of the many reasons I am a Catholic is that Catholicism had a 2,000 year old tradition of believing that faith and reason are inseparable. As Pope John Paul II stated in his 1998 encyclical Fides et Ratio:

“Faith and reason are like two wings on which the human spirit rises to the contemplation of truth; and God has placed in the human heart the desire to know the truth — in a word, to know himself — so that by knowing and loving God, men and women can come to the fullness of the truth about themselves”

Drawing on this long tradition, in recent times Catholic Church has supported science in this symbiotic relationship between faith and reason from its hosting a conference on Scientific Insights into the Evolution of the Universe and of Life (including the denial of speaking engagements to promoters of creationism and intelligent design) to being a strong advocate of being good stewards of the environment by addressing climate change. Mainstream Protestants and Evangelicals also support these causes. One of the better web-based resources for the relationship between faith and science is the BioLogos Foundation, which was founded by Francis Collins, the current head of the U.S. National Institutes of Health (NIH) and former leader of the Human Genome Project. Collins is also the author of the best-selling book The Language of God (It is worth noting that despite impeccable scientific credentials, Collins’ nomination to the NIH was opposed by the radical atheists such as Sam Harris, revealing both their intellectual bankruptcy and bigoted agenda).

Recently, BioLogos had an article that belief in anti-evolutionary creationism is starting to rise in Latin America:

Concerns about the range of scientific literacy in America have been making headlines since the early part of the 20th century, and in classrooms and courtrooms across the United States, controversy continues to erupt over whether our textbooks should include material on creation or evolution or a mix of both. While our conversations about science and faith frequently refer to the concerns of American evangelicals about evolution and the old age of the earth, the influence of anti-evolutionists extends beyond our borders—biblical concordism is becoming a more and more popular view in the developing world, and concerns are rising about the effect these views could have on science education in places other than the United States.

In early June, we helped send evolutionary biologist Steve Roels to the Third World Summit on Evolution, convened in the Galápagos Islands, Ecuador, as an ambassador for BioLogos. The conference was designed as a showcase for cutting edge evolutionary science by Latin American academics, and several prominent scientists from other regions of the world, including a Nobel laureate, were invited as speakers as well.

Latin American scientists at the meeting regularly discussed the need for improved scientific literacy in their countries and more effective outreach to increase acceptance of evolutionary biology. More than one speaker was alarmed at the growing influence conservative religious groups have in framing public discussion of evolution. For many years, it seems that the conflict over evolution in the United States was regarded by international academics as a curiosity, but scientists are now very interested in opposing outspoken creationist groups that are starting to appear in their own countries.

While it is still true that most Latin American countries are predominately Catholic (and that the Catholic Church is “pro-evolution”), missionaries from other religious groups skeptical of evolution (e.g. Jehovah’s Witnesses and Seventh-Day Adventists) have been very successful and their ideas are gaining traction in several areas of Latin America. However, the skepticism with which Dr. Paz-y-Miño-C’s ideas were received suggests that Latin American academics, even professed agnostics and atheists, are looking for a more constructive and conciliatory strategy when it comes to addressing creationist voices in their society.

Biological evolution is currently the best scientific theory of how life formed on this planet. It is possible that will be another theory that better fits the data. But for now evolution is not only the best explanation of the scientific data, it provides amazing insights as to the nature of God and supports a God that is far more wonderful, majestic and amazing that the God creationists believe in. Christians who deny biological evolution are making a mockery of Christianity. As St. Augustine said 1,600 years ago:

“It is a disgraceful and dangerous thing for an unbeliever to hear a Christian, presumably giving the meaning of Holy Scripture, talking nonsense on these topics [the literal interpretation of Genesis] and we should take all means to present such an embarrassing situation, in which people show up a Christian’s vast ignorance and laugh it to scorn”.

It is unfortunate that the anti-evolutionary “curiosity” in the United States is starting to spread to other parts of the world. I am especially surprised that it is gaining steam in Latin America given the high education levels of the region and the historical influence of the Catholic Church. Hopefully this separation of faith from reason will not spread and I appreciate the efforts of the Catholic Church and organizations such as the BioLogos Foundation to promote the harmony of faith and science.

I am a father of two with eclectic interests in theology, philosophy and sports. I chose the pseudonym William Ockham in honor of his contributions to philosophy, specifically Occam's Razor, and its contributions to modern scientific theory. My blog (www.teilhard.com) explores Ignatian Spirituality and the intersection of faith, science and reason through the life and writings of Pierre Teilhard de Chardin (pictured above).
View all posts by William Ockham →
This entry was posted in Reason and Faith and tagged anti-intellectual, BioLogos, BioLogos Foundation, Catholic, Christian, evolution, faith and reason, Faith and Science, Fides et Ratio, Francis Collins, intellectual, Pope Benedict, Pope Benedict XVI, Pope John Paul II, St. Augustine, teilhard de chardin. Bookmark the permalink.