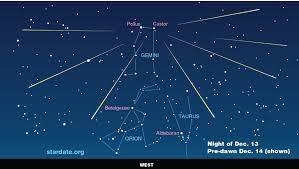 Because one can not have too much of Brother Guy Consolmagno, S.J.

Men of faith have always looked to the heavens.

Tonight, a metro Detroit-bred Vatican astronomer, on the roof of the pope’s summer residence, Castel Gandolfo, will gaze up at the sky to contemplate God — and science.

Jesuit Brother Guy Consolmagno, a self-professed meteorite nerd, is one of 12 astronomers for the Vatican who will join stargazers around the world hoping to witness the annual Geminids meteor shower.

“Today, I would say that one of our most important missions … is to reassure religious people that science is not a threat to their faith, but rather a great support,” Consolmagno said. “That by appreciating God’s creation, we come closer to the Creator.”

Consolmagno, 61, spends his time “working in the laboratory, playing with rocks that fall from outer space, giving talks around the world. I’ve even had a chance to go to Antarctica and look for meteorites.”

“It’s been a fantastic life.”

He works in Italy about eight months and travels four months every year to give lectures and do research at a Vatican observatory based in Arizona.

Astronomers say the Geminid meteor showers can be the most vivid of meteor showers, with as many as 100 to 120 bright, blazing balls visible from any point on Earth. The Geminids, which continue through the middle of next week, peak tonight into Saturday morning.

Consolmagno said Jesuits have been studying the stars in the service of popes dating to the 1500s, charting the skies to help create an accurate calendar. But the Vatican also has been at war with astronomers, and Pope John Paul II apologized in 1992 for the centuries-old condemnation and imprisonment of Galileo for arguing that the Earth orbits the sun.

I am a father of two with eclectic interests in theology, philosophy and sports. I chose the pseudonym William Ockham in honor of his contributions to philosophy, specifically Occam's Razor, and its contributions to modern scientific theory. My blog (www.teilhard.com) explores Ignatian Spirituality and the intersection of faith, science and reason through the life and writings of Pierre Teilhard de Chardin (pictured above).
View all posts by William Ockham →
This entry was posted in Reason and Faith and tagged astronomer, Faith and Science, Geminid, Geminid meteor, Geminid Meteor Shower, guy consolmagno, Ignatian, Jesuit, science and faith, Vatican, vatican observatory. Bookmark the permalink.