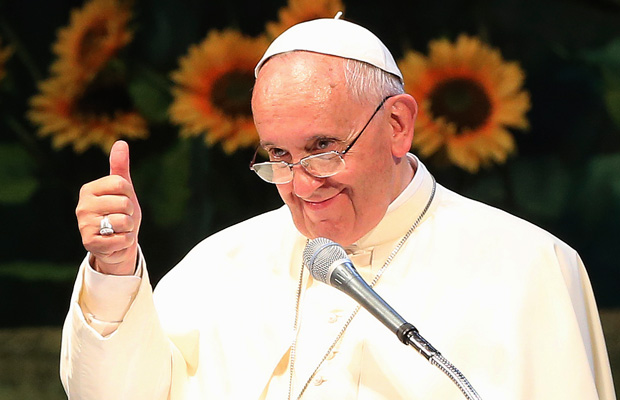 The Gospel can sometimes be challenging but should always be joyful.

For a variety of reasons, the primary one being the inaccurate hyperbole being written from all quarters, I have avoided discussing the recently concluded Special Synod on the Family. However, John Gehring had a good article in Crux that went beyond the specifics of the Synod to how Pope Francis is trying to move beyond the toxic polarization that is the result of contemporary politics and get back to the heart of the Gospel message of a Church unified in the heart of Christ. I encourage you to read the full article here but set forth below is an excerpt:

“To really understand why this papacy is so revolutionary, you have to recognize that Francis is playing the long game. He is setting his vision on a different horizon than those who are stuck fighting trench warfare over a narrow set of hot-button issues.

While Catholics check off boxes on our ideological scorecards, Pope Francis is calling the Church to a profound spiritual conversion. His foes are clericalism, legalism, and anything that gets in the way of the joy of the Gospel. This is not a flashy corporate re-branding or a mere tinkering with tone. It’s a return to the radical values at the root of Christian faith.

When Francis of Assisi came along in the 12th century, his embrace of poverty, personal holiness, and peacemaking were a walking rebuke to an institutional Church mired in worldly corruption. The Franciscans, and later religious orders like Pope Francis’ own Jesuit order, inspired spiritual movements that still inspire people in ways that the fine print of the Church’s Catechism never will.

The pope’s closing address at the synod offered sober words that should caution against triumphalism on the left or right. Speaking to those he called “traditionalists,” Francis warned of a tendency toward “hostile inflexibility,” and of being “closed” in the letter of the law. Turning his attention to “so-called progressives and liberals,” the pope warned of a “deceptive mercy” that “binds wounds without first curing them and treating them.”

This is not the first time the pope has offered a challenge that cuts across ideologies. When he warns about an “economy of exclusion and inequality,” or questions the “crude and naive” trust some leaders place in “trickle-down” economics, surely Republicans who genuflect at the altar of Ronald Reagan are not getting a free pass. Democrats who cheer the pope for his progressive views on labor and the economy can’t ignore his description of abortion as part of a “throw-away culture.”

For Catholics, our Church should make us all a little uncomfortable. Otherwise, we simply use faith to baptize our own political agendas.”

I am a father of two with eclectic interests in theology, philosophy and sports. I chose the pseudonym William Ockham in honor of his contributions to philosophy, specifically Occam's Razor, and its contributions to modern scientific theory. My blog (www.teilhard.com) explores Ignatian Spirituality and the intersection of faith, science and reason through the life and writings of Pierre Teilhard de Chardin (pictured above).
View all posts by William Ockham →
This entry was posted in Uncategorized and tagged Bishops, Catholic, Church, family synod, Gospel, Pope Francis, synod. Bookmark the permalink.