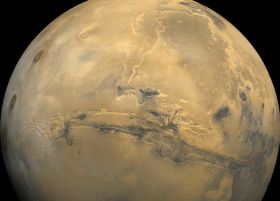 Researchers Say Mars Had Oxygen-Rich Atmosphere 4 Billion Years Ago.  From Physics.org: Differences between Martian meteorites and rocks examined by a NASA rover can be explained if Mars had an oxygen-rich atmosphere 4000 million years ago—well before the rise of atmospheric oxygen on Earth 2500 million years ago.

Two Collider Research Teams Find Evidence of New Quark Particle.  From Physics.org: Two research teams working independently at two different particle accelerators have found evidence of what appears to be a four-quark particle that has come to be called Zc(3900). Both teams are made up of a large number of researchers affiliated with institutions from around the world and both have published their findings in separate papers in the journal Physical Review Letters.

Dusty Surprise Around Giant Black Hole.  From Physics.org: ESO’s Very Large Telescope Interferometer has gathered the most detailed observations ever of the dust around the huge black hole at the centre of an active galaxy. Rather than finding all of the dust in a doughnut-shaped torus around the black hole, astronomers find that much of it is located above and below the torus. These observations show that dust is being pushed away from the black hole as a cool wind—a surprising finding.

Uncovering Quantum Secret in Photosynthesis.  From Science Daily:  The efficient conversion of sunlight into useful energy is one of the challenges which stand in the way of meeting the world’s increasing energy demand in a clean, sustainable way without relying on fossil fuels. Photosynthetic organisms, such as plants and some bacteria, have mastered this process: In less than a couple of trillionths of a second, 95 percent of the sunlight they absorb is whisked away to drive the metabolic reactions that provide them with energy. The efficiency of photovoltaic cells currently on the market is around 20 percent.

Can We Resolve Quantum Paradoxes by Stepping Out of Space and Time? From Scientific American: In the June issue of Scientific American, physicist and writer Hans Christian von Baeyer describes the current state of “deep confusion about the meaning of quantum theory” and discusses one proposal—a denial that the theory describes anything objectively real—for rendering some of the quantum perplexities “less troubling.” Von Baeyer also lists several other possible interpretations, but leaves out what I think is the most promising approach: Transactional Interpretation.  [Editor’s Note:  The concepts are beyond my understanding but I am able to grasp just enough to find it interesting].

I am a father of two with eclectic interests in theology, philosophy and sports. I chose the pseudonym William Ockham in honor of his contributions to philosophy, specifically Occam's Razor, and its contributions to modern scientific theory. My blog (www.teilhard.com) explores Ignatian Spirituality and the intersection of faith, science and reason through the life and writings of Pierre Teilhard de Chardin (pictured above).
View all posts by William Ockham →
This entry was posted in Reason and Faith and tagged black hole, Mars, photosynthesis, quarks. Bookmark the permalink.