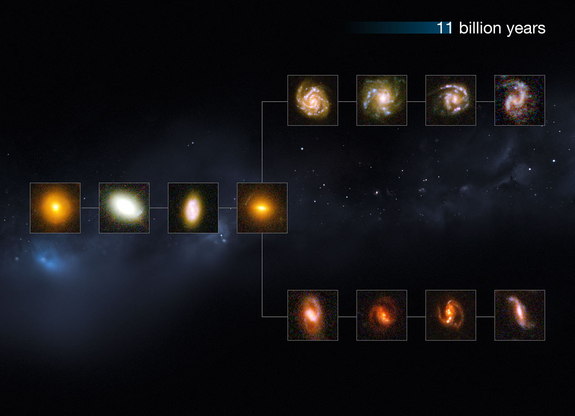 Picture of the galaxies in the universe 11 Billion years ago. Courtesy of NASA.

Here are some of the top stories from cosmology and evolutionary biology from the last couple of weeks:

On the Trail of Dark Energy.  From Science Daily:  One of the biggest mysteries in contemporary particle physics and cosmology is why dark energy, which is observed to dominate energy density of the universe, has a remarkably small (but not zero) value. This value is so small, it is perhaps 120 orders of magnitude less than would be expected based on fundamental physics. Resolving this problem, often called the cosmological constant problem, has so far eluded theorists. Now, two physicists — Lawrence Krauss of Arizona State University and James Dent of the University of Louisiana-Lafayette — suggest that the recently discovered Higgs boson could provide a possible “portal” to physics that could help explain some of the attributes of the enigmatic dark energy, and help resolve the cosmological constant problem.  [Editor’s Note: This is a very interesting theory and Lawrence Krauss is a top-notch scientist.  However, he also strays into philosophy, where he exhibits the same tendency of some other scientists for the folly of scientism.

Has Voyager 1 Left the Solar System?  From The Guardian:  It’s 36 years since Voyager 1 was dispatched in 1977 on a mission to send back images of Jupiter’s turbulent atmosphere and volcanic eruptions on one of its moons, Io. Then it was due to travel on to Saturn to examine that planet’s intricate system of rings and moons. But after travelling more than 11bn miles, where is Voyager now? No one, it seems, knows for sure.  NASA scientists including Edward Stone, the father of the programme at Nasa’s Jet Propulsion Laboratory in Pasadena, say Voyager 1 has yet to pass beyond the reach of our sun’s radiation. But a controversial study published last week in the Astrophysical Journal claims Nasa scientists misinterpreted magnetic field data and the satellite passed beyond the boundary known as the heliosheath a year ago. Put another way, Voyager 1 has left the solar system.

Galaxy Anatomy of the Early Universe was a “Cosmic Zoo”.   From Space.com: The diversity of galaxies in the early universe was as varied as the many galaxy types seen today, a massive Hubble Space Telescope photos survey reveals. The Hubble photo survey found that the assorted range of galaxy types seen today were also present about 11 billion years ago, meaning that the types of galaxies seen today, which astronomers described as a “cosmic zoo,” have been around for at least 80 percent of the universe’s lifespan. The universe is estimated to be 13.82 billion years old. At the heart of the new study is a galaxy classification system known as the Hubble Sequence. The research team found that this system still applied to galaxies 11 billion years ago. The research will appear upcoming edition of the Astrophysical Journal.

Why an Ice Age Occurs Every 100,000 Years.   From Science Daily:   Science has struggled to explain fully why an ice age occurs every 100,000 years. As researchers now demonstrate based on a computer simulation, not only do variations in isolation play a key role, but also the mutual influence of glaciated continents and climate.  Ice ages and warm periods have alternated fairly regularly in Earth’s history: Earth’s climate cools roughly every 100,000 years, with vast areas of North America, Europe and Asia being buried under thick ice sheets. Eventually, the pendulum swings back: it gets warmer and the ice masses melt. While geologists and climate physicists found solid evidence of this 100,000-year cycle in glacial moraines, marine sediments and arctic ice, until now they were unable to find a plausible explanation for it.

Quantum Teleportation:  Transfer of Flying Quantum Bits at the Touch of a Button.   From Science Daily:  By means of the quantum-mechanical entanglement of spatially separated light fields, researchers in Tokyo and Mainz have managed to teleport photonic qubits with extreme reliability. This means that a decisive breakthrough has been achieved some 15 years after the first experiments in the field of optical teleportation. The success of the experiment conducted in Tokyo is attributable to the use of a hybrid technique in which two conceptually different and previously incompatible approaches were combined.

“Crisis in Cosmology” Conference.  From The Northern Echo:  An ongoing “crisis is cosmology” is engaging academics at a conference this week. Experts from around the world have gathered in Durham to discuss the failure of the Large Hadron Collider to provide any evidence for dark matter particles. Scientists say most of the mass of the Universe is made up of unknown forms known as dark matter, or dark energy. Many believe this is made of sub-atomic particles. However, CERN’S findings, or lack of them, have provoked much debate among leaders in the particle physics field.

I am a father of two with eclectic interests in theology, philosophy and sports. I chose the pseudonym William Ockham in honor of his contributions to philosophy, specifically Occam's Razor, and its contributions to modern scientific theory. My blog (www.teilhard.com) explores Ignatian Spirituality and the intersection of faith, science and reason through the life and writings of Pierre Teilhard de Chardin (pictured above).
View all posts by William Ockham →
This entry was posted in Reason and Faith and tagged dark energy, evolution, galaxies, global warming, ice age, NASA, quantum teleportation, Science Daily, solar system, The Guardian, Voyager 1. Bookmark the permalink.