Continuing Education in Faith and Science: From Big Bang to Dark Energy

Depiction of the signature of the Higgs Boson

I am not a scientist. However, as a Christian I have an interest in science for several reasons. First, I am fascinated in the discoveries that science can tell us about our physical universe and ultimately about God the Creator of the physical universe.  Second, science is a sort of universal language that can break through artificial barriers that separate humanity and unite people across cultures and generations. Third, science is a fantastic tool for evangelization. As I mentioned previously, science can be a bridge for Christians to have honest discussions with non-believers over the existence of God and the meaning of life.

As Fr. Mathew Chandrankunnel said about the imperative to integrate science and faith:

Pope John Paul II expressed the desire for dynamic integration by illustrating the physicists urge to unify the four forces into a grand unified theory. The theory of Relativity proposes a physical continuum and genetics envisions a biological continuum. Thus, the scientific disciplines are increasingly unifying the cosmos and life through their explanatory theories. The Aristotelian division of the terrestrial and the celestial was eliminated by Galileo paving the way for this cosmic integration. So the Pope urges the scientists to continue the search for unity not only among scientific disciplines but integrating all forms of knowing processes.  In this aspect he exhorts the scientists and the theologians or science and religion to work toward a unity for the better of humanity. As Pratt correctly observed, often the warpath between faith and reason or religion and science is due to our misinterpretation. ‘The book of nature and the word of God emanate from the same infallible author, and therefore cannot be at variance. But man is a fallible interpreter, and by mistaking one or both of these divine records, he forces them too often into unnatural conflict.’ Pope John Paul II in the same vein, invited theologians to assimilate in their theological parlance the discoveries of science as the ancient Israelites integrated the cosmology of their neighboring cultures. A powerful clarion call is made by Pope John Paul II to both scientists and theologians in the following paragraph to interact and work together as a much needed ministry.

As part of my personal interest in science I have signed up for several Massive Open Online Courses (MOOC) through Coursera, an education company that partners with the top universities and organizations in the world to offer “courses” (or series of lectures) online for anyone to take, for free.  The first “course” I am taking is titled “From the Big Bang to Dark Energy“.  This course will cover various topics on the discoveries about how the Universe evolved in 13.7 billion years since the Big Bang.  From the course description:

We have learned a lot recently about how the Universe evolved in 13.7 billion years since the Big Bang.  More than 80% of matter in the Universe is mysterious Dark Matter, which made stars and galaxies to form.  The newly discovered Higgs-boson became frozen into the Universe a trillionth of a second after the Big Bang and brought order to the Universe.  Yet we still do not know how ordinary matter (atoms) survived against total annihilation by Anti-Matter.  The expansion of the Universe started acceleration about 7 billion years ago and the Universe is being ripped apart.  The culprit is Dark Energy, a mysterious energy multiplying in vacuum.  I will present evidence behind these startling discoveries and discuss what we may learn in the near future. 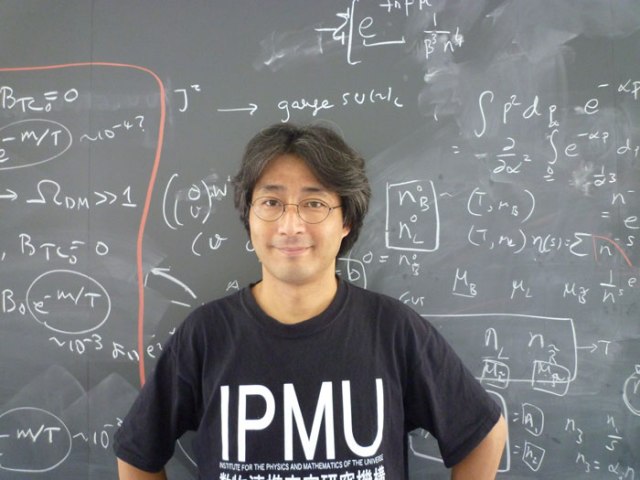 I have had my first two weeks of my Big Bang course and so far it has exceeded expectations. The lecturer, Dr. Hitoshi Murayama, is fantastic. Dr. Murayama is Director of the prestigious Institute for the Physics and Mathematics of the Universe (IPMU) in Tokyo, as well as professor at University of California Berkley (I do not envy his commute :-).  Dr. Murayama has a rare combination of being a very accomplished scientist who can explain difficult concepts in a way that non-scientists can understand. Plus, he has a great sense of humor. When I was researching for information on Dr. Murayama, I found this interesting article on his interaction with the Japanese royal family.

Tomorrow, I will have a summary of how the lectures from the first two weeks (specifically, the Higgs boson) have connected with my faith (specifically, Teilhard de Chardin’s Divine Milieu)

I am a father of two with eclectic interests in theology, philosophy and sports. I chose the pseudonym William Ockham in honor of his contributions to philosophy, specifically Occam's Razor, and its contributions to modern scientific theory. My blog (www.teilhard.com) explores Ignatian Spirituality and the intersection of faith, science and reason through the life and writings of Pierre Teilhard de Chardin (pictured above).
View all posts by William Ockham →
This entry was posted in Reason and Faith and tagged Big Bang, Coursera, Divine Milieu, evolution, faith, God, Higgs boson, Hitoshi Murayama, Institute for the Physics and Mathematics of the Universe, quantum physics, reason, science, teilhard de chardin, Universe. Bookmark the permalink.

7 Responses to Continuing Education in Faith and Science: From Big Bang to Dark Energy