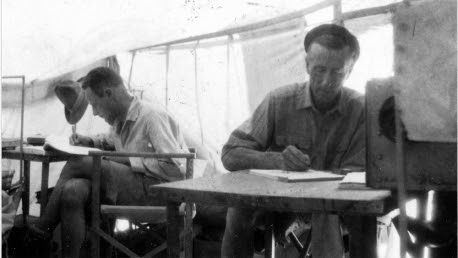 Set forth below is a New Year’s Message from The Teilhard Project with a great quote from Teilhard de Chardin:

HAPPY NEW YEAR!  As we launch into 2014 we at the Teilhard de Chardin Project are reminded of the New Year’s prayer Teilhard once offered:

“At the beginning of this new year, what we ask of that universal presence which envelops us all, is first to reunite us, as in a shared, living center with those whom we love, those who, so far away from us here, are themselves beginning this same new year.

On January 1, 1932, Teilhard de Chardin found himself in Central China with some 40 other men  engaged in Citroën’s Croisiére Jaune, an event described this way by a New York Time movie review of a documentary made about it.

“La Croisière Jaune (The Yellow Journey) is the record of an astonishing motor trip from Beirut, Syria, across Afghanistan, the Himalaya Mountains, the Gobi Desert and the rest of Asia to Peiping.”  It follows “the itinerary of the two heroic little groups who drove in [all-terrain vehicles] along the fabled [Silk Road] where six centuries ago Marco Polo crept along by foot and caravan. The main group started from Beirut going east, while a smaller group worked westward from Peiping, later falling into the hands of the war lord of Sinkiang, who commandeered the autos and imprisoned the men.”

Teilhard was traveling with the westward group, which had left Tientsin on April 6, 1931.  Having successfully joined forces with the eastward group in Sianking Province, they were now working their way back to Peking.  Thus, on this New Year’s Day, after 8 months of sharing rigorous hardships on the road, the 40 members of the Citroën Expedition gathered shortly after dawn at a small mission church to attend a Mass celebrated by their colleague Pere Teilhard de Chardin.  In addressing them Teilhard acknowledges the fact that most of them are unbelievers.

The leader of the expedition, Audouin-Dubreil, kept a copy of his address:

My dear friends, we have met this morning, in this little church, in the heart of China, in order to come before God at the beginning of this new year.  Of course, probably for not one of us here does God mean, or seem, the same thing as for any other of us.  And yet, because we are all intelligent beings, not one of us can escape the feeling, or reflection, that above and beyond ourselves there exists some superior force, and that, since it is superior to ourselves, it must possess some superior form of our own intelligence and our own will.

It is in this mighty presence that we should recollect ourselves for a moment at the beginning of this new year.  What we ask of that universal presence which envelops us all, is first to reunite us, as in a shared, living center with those whom we love, those who, so far away from us here, are themselves beginning this same new year.

Then, considering what must be the boundless power of this force, we beseech it to take a favorable hand for us and for our friends and families in the tangled and seemingly uncontrollable web of events that await us in the months ahead.  So may success crown our enterprises.  So may joy dwell in our hearts and all around us.  So may what sorrow cannot be spared us be transfigured into a finer joy, the joy of know that we have occupied each his own station in the universe, and that, in that station, we have done as we ought.

Around us and in us, God, through his deep-reaching power, can bring all this about.  And it is in order that he may indeed do so that, for all of you, I am about to offer him this Mass, the highest form of Christian prayer.

We wish you and all those you love, wherever they may be, a joyful new year with a renewed zest for life!

I am a father of two with eclectic interests in theology, philosophy and sports. I chose the pseudonym William Ockham in honor of his contributions to philosophy, specifically Occam's Razor, and its contributions to modern scientific theory. My blog (www.teilhard.com) explores Ignatian Spirituality and the intersection of faith, science and reason through the life and writings of Pierre Teilhard de Chardin (pictured above).
View all posts by William Ockham →
This entry was posted in Uncategorized and tagged China, God, joy, love, New Years, peace, Pierre Teilhard de Chardin, teilhard, teilhard de chardin, The Teilhard Project. Bookmark the permalink.