Feast of the Transfiguration: Teilhard de Chardin and Mass on the World 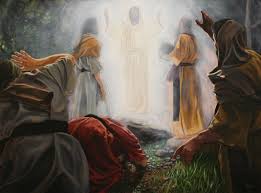 Today is the Feast of the Transfiguration.  It was one of those rare instances during Jesus’ lifetime when His divinity was clearly apparent to his closest disciples.  The Transfiguration also had a special place in the life and theology of Teilhard de Chardin.  Teilhard’s grand vision was the Eucharist and the Sacred Heart of Christ being the radiating center of the universe.  For Teilhard, the Transfiguration was a precursor of the Second Coming when Christ would bring the universe home to Himself.

Although the thoughts in Mass on the World had been crystalizing for several years, the specific meditation suggested itself to Teilhard de Chardin when, in the course of a scientific expedition, he found himself one day out in the Ordos desert in China where it was impossible for him to offer Mass. This happened, it seems, on or around the Feast of the Transfiguration, a feast for which he had a special love. Teilhard’s thoughts therefore turned to the radiation of the Eucharistic presence of Christ through the universe. He did not of course confuse that presence, the effect of transubstantiation in the strict sense, with the omnipresence of the divine Logos. His faith in the mystery of the Eucharist was not only ardent: it was also as exact as it was firm. But his faith was sufficiently strong and realistic to show him its consequences (or, as he put it, the “prolongations” and “extensions”). At a time when individualism was obscuring the fullness of traditional Catholic teaching on this mystery of oneness with the Body of Christ (and unfortunately it still is), Teilhard wrote: “When Christ comes to one of his faithful it is not simply in order to commune with him as an individual; . . . when, through the mouth of the priest, he says Hoc est corpus meum, these words extend beyond the morsel of bread over which they are said: they give birth to the whole mystical body of Christ. The effect of the priestly act extends beyond the consecrated host to the cosmos itself. . .: the entire realm of matter is slowly but irresistibly affected by this great consecration.

Earlier, in 1917, Teilhard de Chardin had written, in Le Pretre:

“When Christ, extending the process of his incarnation, descends into the bread in order to replace it, his action is not limited to the material morsel which his presence will, for a brief moment, volatilize: this transubstantiation is aureoled with a real though attenuated divinizing of the entire universe. From the particular cosmic element into which he has entered, the activity of the Word goes forth to subdue and to draw into himself all the rest.”

Such passages as these not only contain an exact affirmation of the essence of the Eucharistic mystery, but also make an equally exact distinction between the essential mystery and the further effects in which its fecundity is manifested: the growth of Christ’s mystical body, the consecration of the cosmos. They also bear witness to a plenitude of faith in which Teilhard de Chardin’s thought is revealed as being authentically and profoundly in accord with the thought of St Paul. He “shows himself preoccupied above all with giving his daily Mass a cosmic function and planetary dimensions . . This, of course, he considered could be linked up with the most orthodox theology of the holy Eucharist.”

A year after writing Mass on the World, Teilhard de Chardin further defined his thought, in Mon Univers:

“To interpret adequately the fundamental position of the Eucharist in the economy of the world . . . it is, I think, necessary that Christian thought and Christian prayer should give great importance to the real and physical extensions of the Eucharistic Presence. . . As we properly use the term “our bodies” to signify the localized center of our spiritual radiations . . ., so it must be said that in its initial and primary meaning the term “Body of Christ” is limited, in this context, to the consecrated species of Bread and Wine. But. . .the host is comparable to a blazing fire whose flames spread out like rays all round it.”

The above writings are part of mainstream Catholic theology through the writings of Pope Benedict XVI and other leading theologians.  At each Mass, we celebrate the universal Body of Christ and the divinization of the cosmos.

For further reading on the Mass on the World, I would recommend two resources.  First, is the online version of Mass on the World by Religion Online.  This contains the entire text and is free of charge.

I am a father of two with eclectic interests in theology, philosophy and sports. I chose the pseudonym William Ockham in honor of his contributions to philosophy, specifically Occam's Razor, and its contributions to modern scientific theory. My blog (www.teilhard.com) explores Ignatian Spirituality and the intersection of faith, science and reason through the life and writings of Pierre Teilhard de Chardin (pictured above).
View all posts by William Ockham →
This entry was posted in Ignatian Spirituality and tagged China, Feast of the Transfiguration, Hymn of the Universe, Mass on the World, N. Max Wildiers, Pierre Teilhard de Chardin, Pope Benedict XVI, Pope Francis, Sacred Heart of Christ, teilhard, teilhard de chardin, Thomas King SJ, Thomas M. King, Transfiguration. Bookmark the permalink.

1 Response to Feast of the Transfiguration: Teilhard de Chardin and Mass on the World