Sunday Reflection on Epiphany (January 4, 2015): A Real Truth That May or May Not Have Been Historical 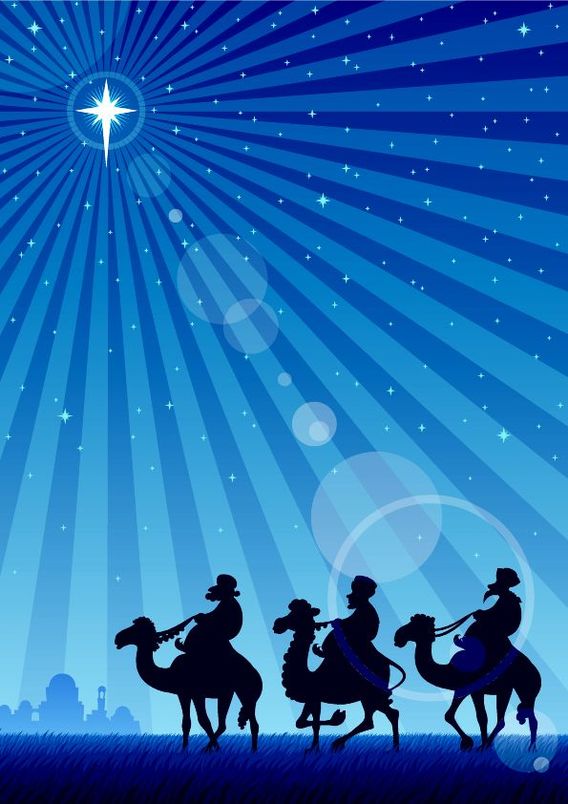 A powerful truth, which may or may not have been a historical event.

[Note: This is a slightly modified version of the reflection I posted last year]

This weekend is the celebration of the Epiphany. The readings can be found here.

The journey of the Magi is one of the most beautiful stories in the Bible.  Mysterious foreigners receive a cosmic sign to leave their home and pay homage to the newborn son of God.  The imagery describes the mystery of the cosmos and the message that Christ has come for all people.  It is a fitting end to the “twelve days of Christmas”. In the Eastern Orthodox Church the Epiphany is a bigger celebration than the Feast of the Nativity on December 25.

A few years ago the American Atheists spent money on a billboard with the tagline “You Know It’s a Myth” with the picture of the wise men traveling to visit the infant Jesus. I found this very odd on a number levels. I believe the point they were trying to make is that if the story of the Magi found in Chapter 2 of Matthew is not a historical event, then it is not “true”. In that sense American Atheists are showing their epistemological kinship with Christian fundamentalists in that both groups believe in biblical literalism.

Catholics believe the Word of God is much richer than the literalists do.  Catholic teaching states that the Bible conveys eternal truths through a variety of literary genres.  These truths can be in the form of describing historical events (such as the Resurrection) or theological reflections (such as many of the parables that Jesus told).

Although the infancy narratives in Matthew and Luke may contain historical elements, these stories are primarily designed to be theological reflections on the meaning of the Incarnation. As preeminent Catholic biblical scholar Raymond Brown says:

“[T]here is no way we can know for certain how historical many details in the infancy narratives are; or where Matthew and Luke obtained their divergent information. In making judgments we should be careful to avoid both naive fundamentalism and destructive skepticism. To take every word of these accounts as literal history does not deal realistically with the problems. Yet the accounts should not be dismissed as mere fiction or myths. Between precise history and purely imaginative creation there is a whole range of ways to convey a religious message.”

At the end of this lengthy chapter, the question arises: how are we to understand all this? Are we dealing with history that actually took place, or is it . . . a theological meditation, presented under the guise of stories? In this regard, Jean Daniélou rightly observes: “The adoration of the Magi, unlike the story of the annunciation [to Mary], does not touch upon any essential aspect of our faith. No foundations would be shaken if it were simply an invention of Matthew’s based on a theological idea” (The Infancy Narratives, p. 95).

Pope Benedict describes the primary message of the Magi in powerfully cosmic terms that echo the thoughts of Teilhard de Chardin:

“If these wise men, led by the star to search for the king of the Jews, represent the movement of the Gentiles toward Christ, this implies that the cosmos speaks of Christ, even though its language is not yet fully intelligible to man in his present state. The language of creation provides a great many pointers. It gives man an intuition of the Creator. Moreover, it arouses the expectation, indeed the hope, that this God will one day reveal himself. And at the same time it elicits an awareness that man can and should approach him. But the knowledge that emerges from creation, and acquires concrete form in the religions, can also become disoriented, so that it no longer prompts man to transcend himself, but induces him to lock himself into systems with which he believes he can, in some way, oppose the hidden powers of the world.”

This theme of Pope Benedict is expanded upon by the Lutheran minister Rev. Dawn Hutchings of Holy Cross Lutheran Church north of Toronto Canada.  I encourage you to read the full homily here but set forth below is an extended excerpt:

“This wonderful tale of three astrologers scouring the heavens for signs of new happenings on the planet captures the imagination of every generation. You see, we humans are meaning-making creatures eternally searching for the Mystery at the heart of the universe that dignifies and enchants our lives. Human beings just can’t help trying to understanding the meaning of it all. We are constantly trying to understand the how and the why of existence.

But alas the indignity of our modern times lies precisely in our being told that the cosmos—this universe in which we live and move and have our being—is essentially purposeless, without meaning or direction.

There’s this thing that some people call Scientism afoot that threatens our ability to see beyond our noses. Scientism is the religion of those scientists who refuse to concede that the phrase, “I don’t know” is sometimes the only answer that we have. Scientism is science that slips into an ideology of materialism—an ideology of materialism is the idea that every thing and every body is nothing more than the random collision of atoms and molecules. Scientism is the assertion that we and the universe are nothing more than  a cosmic fluke of enormous proportions going nowhere in particular. According to the dictates of scientism: any meaning that we might attribute to our existence is therefore just that—our own arbitrarily generated attributions of purpose to a journey to what is at the end of the day nothing more than the purposeless march of time. Unlike science, that provides for the possibility of a creator, scientism would have us believe, that there is no meaning behind our existence, we simply randomly evolved and we will someday randomly devolve, or dissolve into a pile of dust.

That’s why I love the parable of the magi’s visit! For these ancient astrologers had their own ways of determining meaning,“the heavens are telling the glory of God, and the earth proclaims God’s handiwork”. A new star appears in the heavens and for those with enchanted hearts, it means that God is on the move—something new is about to happen.  So they chased down the star, to see this thing that God had done.

Unlike our ancestors, we live in a culture in desperate need of enchantment and awe. We are so meaning-starved as citizens of the Western world in the 21st century that we chase after almost any kind of novel spiritual movement. The pendulum swings from scientific materialism to the latest cult so starved are we for spiritual re-enchantment. In our state of spiritual hunger we’ll accept any morsel from the smorgasbord of new age spirituality.

The sages of our age, the astronomers who seek meaning from the skies are not all so quick to subscribe to the big bang theory of randomness. For they have seen great things in the sky and there are many among this wise folks who insist that the cosmos is infused with meaning and purpose—Indeed, they tell us that  stars and the planetary bodies participate in this journey of cosmic meaning.

Those sages who are engaged in scientific study are not all followers of scientism. The notion of a creator, a first cause, or a driving force, dare we say God, as the power that drives all of existence is seriously explored by the wise folks of academia and science has refused to exclude the possibility. And yet there is the illusion afoot that the followers of science find faith incompatible with the pursuit of meaning. When the truth is that scientism seems to be the choice of those who have given up or forsaken the pursuit of meaning. Science itself would seem to deny scientism!

More and more, scientists, are beginning to speak out and more and more academics are joining the chorus of those who insist that there is indeed a power at work in the large-scale structures of the universe, in the evolutionary unfolding of the planet, and in our own personal and collective lives. To pursue knowledge is to continue the journey of the magi who pursued light, the timeless symbol of knowledge. To follow the light, to go where wisdom and knowledge lead, is to seek the answer to the age old questions: Where do we come from and where are we going?  Why are we here?. You don’t need to be a scientist or an academic to ponder the secrets of existence. Like the magi, we too can seek the light. Just as the magi gazed up at the light in the heavens and followed it to the place where it lead—and found the Christ-child—we too can follow the light in our own lives.

The theory of allurement isn’t confined to astronomy, it dips into to theology and from the priest come palaeontologist, Pierre Teilhard de Chardin, it borrows the notion of the Omega Point. The Omega Point is the completion and perfection of all creation to which we are being drawn, no-coercively, gently, and in a way that respects our freedom.

How do we find our way to the Omega Point?  Well that’s the real beauty of this theory, you see it’s described as a completely natural process that kicks in the moment we decide to trust this Power—this power that goes by many names, you and I are bold enough to call this power God, some call it Wisdom, but there are other names.

The point of the Omega Point, is that all we must do is to follow the way of the Magi and look for the light. Physicists call this quest for the light, “attending to our allurement”. The dynamic of allurement is a powerful force in the psychological make-up of the human being.

Christ is the ever-present light of our lives, beckoning from the many stars that allure us, calling us toward our own divine image and inspiring us to give our lives as an offering so that all of creation may continue to evolve. Evolution is not random; each of us has a unique role to play. But let’s not be naïve. Each of us possesses an inner Herod who doesn’t like that we’re paying homage to any king other than our self. The story of the Magi got this detail exactly correct. Something within us resists God—call it ego if you will—but there is something within us that thinks that it alone deserves gifts of gold, frankincense and myrrh. It does not want to worship or pay homage; it wants to be on the receiving end of both and will go to great lengths to make it happen. It wants to know where the light is leading, not to submit to it, not to give thanks, not to sing praise and be in awe, but rather to scope out it’s rival, in a vain attempt to outshine it, or even destroy it.

Herod is also found in our families, and in our social, political, economic and religious systems. Herod is present as the power of domination. Herod hates the fascination of others unless it is directed toward him. Herod—within and without—refuses to serve any higher power; Herod refuses to fit in, to take his place in grace. Herod will try to rule the show.

Raymond Brown, The Birth of the Messiah: A Commentary on The Infancy Narratives in the Gospels of Matthew and Luke

3 Responses to Sunday Reflection on Epiphany (January 4, 2015): A Real Truth That May or May Not Have Been Historical