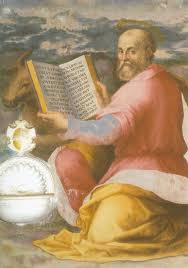 Practically all we know of Luke (and it is not very much) comes from the New Testament. We do not know the place or date of his birth. In Paul’s Letter to Philemon (v.24) Paul refers to “Luke, my fellow worker”. In the Letter to the Colossians (4:14) he speaks of Luke “our dear physician”, so it is taken that he was a medical practitioner of some kind. In the Second Letter to Timothy (4:11) Paul says, “I have no one here with me but Luke”. He seems to have been a close companion of Paul on some of his missionary journeys and on his final journey to Rome. This is based on the belief that the Acts of the Apostles was written by Luke and that in the Acts a number of passages use the word “we”, suggesting the writer was a companion of Paul (Acts 16:10-17; 20:5-15; 27:1-28:16).

As well as being the author of the Acts, Luke also taken to be the author of the gospel bearing his name. The two works are linked by his referring at the beginning of Acts to “the former treatise which I wrote” (Acts 1:1). Both books are dedicated to someone named Theophilus and no scholar seriously doubts that the same person wrote both works, even though neither work contains the name of its author.

A number of assertions about Luke are based on a document believed to date (in part) from the 2nd century:

Luke, a native of Antioch, by profession a physician. He had become a disciple of the apostles and later followed Paul until his [Paul’s] martyrdom. Having served the Lord continuously, unmarried and without children, filled with the Holy Spirit he died at the age of 84 years.

However, there is no way that these statements can be historically verified. There are legends that Luke was with Jesus as one of the 72 disciples or that he was one of the two disciples on the way to Emmaus on Easter Sunday, a story which, incidentally, only appears in Luke’s gospel. Based on the quality of the writings attributed to him, Luke is thought to have been well educated. The Letter of Paul to the Colossians (4:11) seems to include Luke among the non-circumcised companions of Paul and hence that he was a Gentile. In which case, Luke would seem to be the only non-Jewish author of New Testament books.

Luke’s gospel has many special characteristics which perhaps tell us something about the kind of person he was. Unique to him is the account of the circumstances leading to the conception and birth of Jesus (Luke 1-2); some of the most touching parables in the Gospel, such as that of the Good Samaritan and the Prodigal Son; the words of Jesus during his Passion to the women of Jerusalem and the so-called ‘Good Thief’. While presenting an all-or-nothing following of Jesus with an emphasis on radical simplicity of life, there is at the same time great emphasis on the compassionate nature of Jesus. He shows Jesus praying before every important phase of his public life and there is an openness to the Gentiles to whom the gospel is especially directed.

Women figure more prominently in Luke’s gospel than in any of the others – the mother of Jesus, her cousin Elizabeth, the sisters Mary and Martha, the widow of Nain, and the striking story of the sinful woman in the house of Simon the Pharisee. In the Acts of the Apostles Luke is revealed as a very accurate observer, skilfully linking the sacred events with secular history. Many of his details have been confirmed by archaeology.

His writings have received high endorsements from secular scholars:

“Luke is a historian of the first rank; not merely are his statements of fact trusworthy…[he] should be placed along with the very greatest of historians.” (Sir William Ramsay, archaeologist)

“Luke is a consummate historian, to be ranked in his own right with the great writers of the Greeks.” (E.M. Blaiklock, Professor of Classics at Auckland University)

However, it should also be strongly emphasised that Luke did not write as a historian but as an evangelist, proclaiming the message of Jesus as the Word of God to the world. Some early Church documents say that Luke died in Thebes, the capital of Boeotia. There is a tradition that he was a painter and one well-known icon of the Virgin Mary has been attributed to him but with little claim to historical accuracy. Here is a link to icons of Mary that may have been painted by St. Luke (courtesy of Julie, an outstanding artist and friend of the blog).

It is understandable why Luke should be made the patron of artists and doctors. When represented with the other three evangelists his symbol is an ox, perhaps referring to the sacrifice in the Temple mentioned at the beginning of his gospel in the scene of Zechariah and the angel announcing the birth of John the Baptist. The earliest pictures of him show him writing his gospel but in later art works he is represented as painting the Virgin Mary. Both Constantinople (Istanbul) and Padua in Italy claim to have his relics.

St. Luke is the patron saint of artists, physicians, surgeons, students and butchers.

I am a father of two with eclectic interests in theology, philosophy and sports. I chose the pseudonym William Ockham in honor of his contributions to philosophy, specifically Occam's Razor, and its contributions to modern scientific theory. My blog (www.teilhard.com) explores Ignatian Spirituality and the intersection of faith, science and reason through the life and writings of Pierre Teilhard de Chardin (pictured above).
View all posts by William Ockham →
This entry was posted in Uncategorized and tagged artist, Catholic, Christian, Gospel, Gospel of Luke, icon, Mary, painting, St. Luke, St. Mary. Bookmark the permalink.

2 Responses to Feast of St. Luke the Evangelist (October 18)