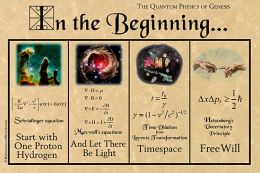 One of the great contributions that Teilhard de Chardin made to Christian theology is his reconciliation of traditional Christian theology with evolutionary biology. Science has continued to advance. Discoveries in the past 100 years, from the Big Bang to particle physics provide additional evidence in support of the monotheistic belief that there is an intelligent Creator of the Universe. Moreover, the strange world physics of quantum mechanics also supports the notion that this Creator is relational, similar to the Christian belief in the Trinity.

I am not a scientist and do not pretend to understand anything more than the basics of quantum physics. However, George Farahat of the blog Today’s Questions does have background in quantum physics and did a great job of synthesizing quantum physics and the triune God in a recent blogpost. I encourage you to read the entire post here, but set forth below is an extended excerpt:

“In 2007, I gave a lecture on evidence in the cosmos for the God of Christians. It was precisely based on quantum physics. Nothing has changed since then other than the fact that we are now aware of many more facts in human behavior, the accelerating rate of the development and deployment of information technology, the development of life on earth for billions of years with its challenges, and more knowledge on the intricate nature of the expanding cosmos. Those who wish to remain in their simple faith and ignore scientific advances may well find themselves surrounded by questions from their friends, children or grandchildren: Why do you still believe?

In this post, I survey a number of human disciplines to show that the probabilities of quantum physics are at the core of every action in the cosmos. Cases in each discipline will be examined but due to space limitation only one publication will be referenced.”

Mr. Farahat then discusses recent developments in a number of disciplines such as particle physics, chaotic systems, evolutionary biology, collaborative information systems, sociology, neuroscience, game theory and particle physics and how each of these disciples point to the existence of God. Mr. Farahat then has a detailed discussion on quantum physics:

Although quantum physics has been used in numerous inventions since its discovery (such as transistors in electronic devices, lasers used in CDs, quantum cryptography, quantum computers and more), no scientist claims to fully understand it nearly 90 years after the formulation of Quantum Theory. Finding the Higgs boson in the past year at CERN‘s Large Hydron Collider, for which Peter Higgs and Francois Englert have been awarded the 2013 Nobel Prize in physics, has opened more questions than answers for scientists to explore. The elusive Higgs boson, dubbed the “God Particle” by Leon Lederman, reveals the quantum nature of everything from matter to antimatter and energy, calculated at almost the beginning of the Big Bang. In his 1993 book “The God Particle,” Leon Lederman, who is also a Nobel Laureate, asks “If the Universe is the Answer, What is the Question?”

John Polkinghorne, retired professor of mathematical physics at Cambridge University, wrote, in one of his latest books: Quantum Physics and Theology in 2008, about relationship as science is attempting to discover it at the subnuclear level: “Quantum theory brought to light a remarkable form of entanglement between subatomic particles that have once interacted with each other (the so-called EPR effect), which implies that they remain effectively a single system however far they may subsequently separate spatially- a counterintuitive togetherness-in-separation that has been abundantly confirmed experimentally as a property of nature. The physical world looks more and more like a universe that would be the fitting creation of the trinitarian God, the One whose deepest reality is relational.” (Cf. John Polkinghorne, 2008, “Quantum Physics and Theology: An Unexpected Kinship” Published by Yale University Press).

The above findings support the 2 most important observations in quantum physics:

1. The probabilistic nature of particles which yields the Uncertainty Principle

2. The communication between particles at long distances (quantum entanglement)

From 2 above, everything must be in a relationship to live. In Christianity God is a relatedness or a relationship of selfless love. It is our belief that God the Father being Love (1 John 4: 8) abandons the fullness of divinity and gives all he has to his image the Son (John 10:30; Col 1: 15-19; Phil 2: 6-11 ) who in turn returns this  love in the Holy Spirit who is the binding love of Father and Son (John 15). The concept that God is relatedness or relational is found not only in Holy Scriptures but also in doctors of the Church including St. Thomas Aquinas and, in our days,  Joseph Ratzinger (Bishop of Rome Emeritus Pope Benedict XVI).

If this is true, then we can say that the cosmos is signed by the stamp of the Triune God of Christians.

From 1, we all live in a cosmos still  in development. Certainty is achieved beyond this life when we are in the togetherness of the family of the kingdom of God. Hell is reserved to those who never loved nor dared to explore the probability of opening themselves to the vulnerability of the other that in him God lives. According to St. Paul “For now we see in a mirror dimly but then face to face” (1 Cor. 13: 12).

I encourage you to read the entire article here.

I am a father of two with eclectic interests in theology, philosophy and sports. I chose the pseudonym William Ockham in honor of his contributions to philosophy, specifically Occam's Razor, and its contributions to modern scientific theory. My blog (www.teilhard.com) explores Ignatian Spirituality and the intersection of faith, science and reason through the life and writings of Pierre Teilhard de Chardin (pictured above).
View all posts by William Ockham →
This entry was posted in Reason and Faith and tagged Big Bang, Catholic, Christian, evolution, faith and reason, Faith and Science, Genesis, George Farahat, John Polkinghorne, particle physics, quantum physics, quantum theology, reason and faith, science, science and faith, teilhard de chardin, theology, trinity, Triune God. Bookmark the permalink.

16 Responses to Quantum Physics, Relationality and the Triune God